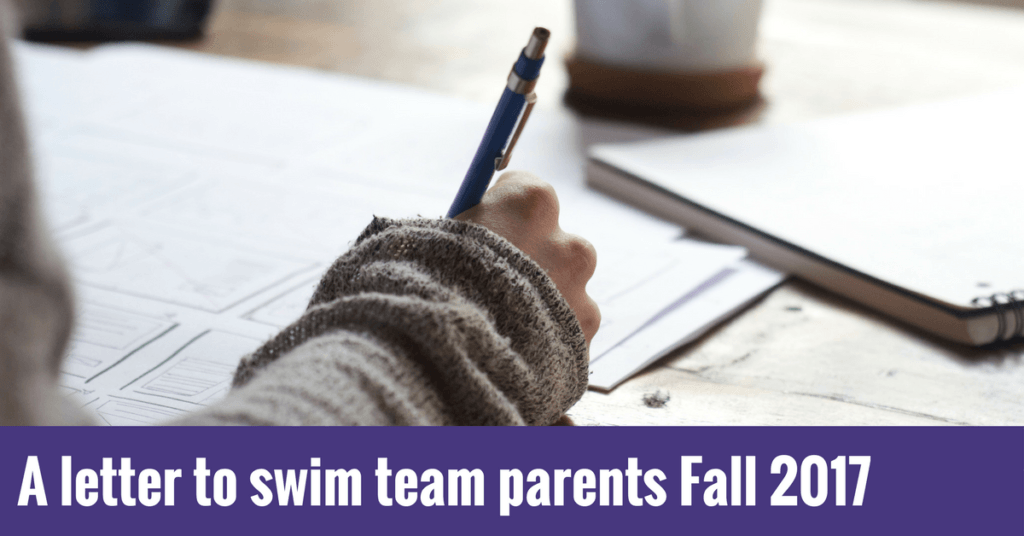 Fall is over. The first season of the 2017-2018 swim year. Can you believe that it has been 14 weeks already? Fun fact, new research shows that repetition, doing the same thing every day, makes you perceive time moving faster. When you do something new and different you perceive that time moves slower. A good way to slow life down, to make your days not seem like a blur is to expose yourself to new and challenging things. Did childhood seem like a slog because every day was new filled with things you weren’t aware of before?

Winter season starts on December 4th, and if you haven’t, you need to register.

New season, new faces; you’ll notice different people at practices as we shuffle swimmers to new groups. I want you to remember that while we do larger moves that coincide with seasons, we also move throughout the swim session. One of my go to phrases about switching groups is that the “door isn’t closed, we’re just waiting for the swimmer to step through.” If it is clear someone is ready for the next group, we’ll move them instead of waiting 16 weeks.

At the end of a season and with people moving on, and people staying in the same group, I think of our program and how we’re training our swimmers. Take a few moments if you’re interested to get some insight into how I think about teaching swimming.

I think that swimming is a practice of perfection. It is a physical expression of excellence. If you’ve read “Zen and the Art of Motorcycle Maintenance” you’re likely familiar with the inquiry into what makes something “good” or possessing “Quality.” Quality is basically the inherent beauty, or excellence, or value that something (action, art, habit, physical expression) has that is instantly recognizable. For example, you can see excellent swimming, even if you don’t know what the underling parts are to make it excellent. Perhaps you see an amazing streamline and appreciate how great it is, but don’t realize that there are multiple components to its execution. (Ask your swimmers the three key things to streamline).

Katie Ledecky is perhaps the greatest athlete in swimming right now. Her story is phenomenal, and worth a read if you’re interested. You can watch her swim, and you can see the Quality she has, you can feel instantly that you’re watching perfection; you’re watching effort manifest.

That is my goal for our swimmers.

Look, I know that on developmental groups we’re not going to have world breaking record setters tomorrow. We’re not sending an 8-year-old that has been swimming for a year to zones, or to win state. Instead, I want to establish the habit, the interest, the love, fun, and drive for excellence. That starts with routine, effort, and making attempts.

We can train and instill now in our beginning swimmers the habit for perfection, the drive to try something new and different (change something about your stroke to improve it), to make an attempt at something that wasn’t possible before.

Right now, we have routines that we do every single day. I ask the same questions every single day, at the same time, in the same place, often hearing the same responses from the same people! And yet every day I have enthusiastic hand raises to answer the questions that they already, by habit, by rote, by heart, know the answers to.  Ask your swimmer the three things to streamline and the three things to position 11. Routine makes learning easier.

I have perfection on the mind because we’ve been playing the “Fail Box” game on Minnows this last week. Here are the rules:

1)      Do the challenge. It has to be done perfectly, with strict adherence to excellence: if the challenge is to streamline underwater you have to do everything absolutely correctly during the entire attempt.

2)      If you do anything wrong, illegal, or not what we deem “good swimming” then it is a “fail.” Using the above example, if you streamline on the surface it is a “fail.”

3)      If anyone on your team “fails” then your whole team “fails,” and after the attempts you do something from the fail box.

4)      If everyone on your team “succeeds” then your team gets to do something from the success box.

5)      After every challenge regardless of success or fail, everyone does a swim; something like a 25 free kick, or a 50 choice swim.

This game is a great late season activity that capitalizes on many of the things we do throughout the preceding 13 weeks.

In order for this game to be effective we need an environment of safe failure. The swimmers need to know that they’re not in trouble for “failing” a skill, or for making a mistake. We build that trust and opportunity to make mistakes in our structure and our feedback throughout the season.

I don’t use the word “try” when I’m coaching. In fact, I only use it when I’m talking about food. To me, it is a subtle implication of failure. If I ask a swimmer to “try a streamline.” The language implies that the swimmer can do what I ask once, or “try” without effort to do what I request and then ignore the command or stroke correction reverting to their poor technique. Instead I’ll say, “make an attempt to do this…” The language is crafted to point in a positive direction, it opens a door and aims attention to a target behavior, a target goal. The words push the swimmer into putting in effort.

When we learn new skills, and when we practice perfection, most is during the short distance skill training. We often do ½ length activities; 3 x SL + 5 free + 1 breath + flip, or 5 x SL + 1 BR Arm, then separately 1 BR Kick in position 11.

During these multiple attempts, we’re strict with the execution. Streamline has to be exact, arm movement precise, and adherence to the activity strict. If we’re doing SL + 3 free and I see someone do 4 strokes, I’ll comment on it. Nit picking? Did you read Kaite Ledecky’s story? She swam her world breaking 200 FR with the exact same number of strokes each of the first two 50’s, then the same stroke count on the last two 50’s. Counting strokes matters. Following directions matters. I know if you’re doing exactly 3 strokes you’re thinking about what you’re doing. You’re aware of the action asked, you’re making effort. Finding and fostering effort is the most important part of coaching swimming.

Inside these shorter repetitive skill swimming we give constant feedback, and it is often pointing out erroneous behavior coupled with a targeted alternative: “you did 5 strokes instead of 3, next time do 3. You didn’t take a breath, you must take 1 breath on strokes 2, 3, or 4. You did this, next time do that.” Throughout the season though, swimmers get used to this constant form of corrective feedback. They get used to the expectation of exactness, the expectation of precise swimming.

When we play the “Fail Box” game, I don’t think swimmers feel devastated by “failing” a skill (if I see that I temper the delivery, or offer alternative challenges for excessive failures). It was an attempt that didn’t meet perfection. And that is okay. That is expected. The challenge skills get progressively more difficult with the expectation that someone will fail. We’ve had 14 weeks to provide a healthy encouraging atmosphere to allow for mistakes. During this game swimmers coach each other, they help swimmers that make a mistake, or do something incorrect. It changes lazy habit that leads to a “fail.” It produces cheers and effort to get a fun success option. I see comradery born in the challenge to succeed subsequent rounds.

During the “fail box” game I frequently see the thoughtful effort that I know when practiced, when flexed, and when used often will lead to future success not just in swimming but the rest of their lives.

So we embark on another season, another 16 weeks where my goal will be to provide a fun and challenging environment that will promote effort, promote making attempts at new things, and will promote good swimming habits.

Let me know if you have questions or comments.