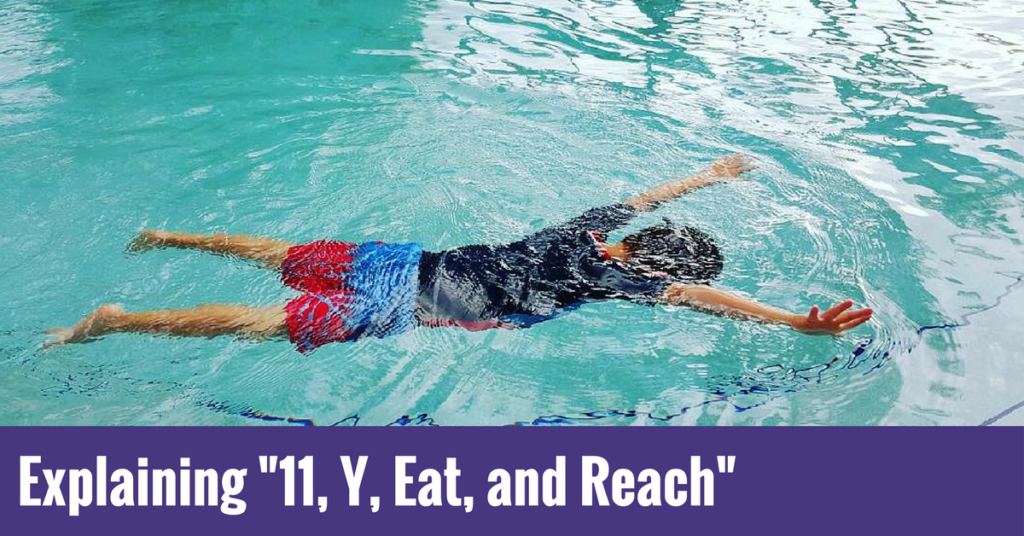 Listening to your comments

There is a survey that you can fill out that I check regularly to gauge what you want to know about and give you better material. You can fill it out here: https://goo.gl/forms/wMlN2znt1MBKRhGo2

One of the comments was, “I tried ’11, Y, Eat, and Reach’ in Australia, but it didn’t work. It conflicted with AustSwim.” There were a few mentions how it wasn’t easily understood. Today I’m going to show you a series of videos I did that will illustrate exactly what 11, Y, Eat, and Reach is, and then go into some detail about where it came from and why we do it.

It is a series of words that describe arm motions that teach the beginnings of breaststroke. If you don’t know, I coach a swim team from beginners to regional swimmers. Basically, I teach every day about 100 kids over three groups how to swim each of the competitive strokes, and then start them on the basics of “training and competition.” This year (2017) I sent 9 swimmers to the regional championships in Illinois (one of the fastest states with the most difficult times in the nation). The majority of those swims were freestyle, but two were 8 year olds competing against 10 and Unders in the 50 breaststroke. How did those 8 year olds get so good at breaststroke? They came to practice, and they started learning the stroke with “11, Y, Eat, and Reach.”

The first step to breaststroke is learning to float or glide with your body straight in the water. Then on deck, we do soldier position, streamline, then position 11, move into Y, then Eat, then reach back to 11. We start doing this skill in our swim lessons, but also in our very first developmental swim team group. After we know how to “set up our lane,” circle swim, streamline, and do 25’s we start introducing breaststroke arms with ’11, Y, Eat, and Reach,” and the basics of breaststroke kick.

Start using this progression on the deck, then we move it in the water and do very short, simplified versions of it without breathing.

A typical series of activities for a beginning swim team class is:

Then, once the general arm motion is demonstrated on land while standing. Get in the water and attempt to just do that exact same motion while floating face down. Remember, this is not doing the breaststroke swim with the pull and the big movement forward. This is simply demonstrating that the swimmer can do that very specific series of arm motions while face down in the water.

(This is important because the breaststroke pull is a scull, it is a “turning the corner” and not a true ‘pull.’ It is perhaps the most difficult concept to teach, and to do well, and Position 11 and 11, Y, Eat, and Reach is revolutionary and simple).

Once they have mastered the activity, or been given the opportunity to attempt it with feedback and correction, allow swimmers to do a different activity that does not require the mental focus that restraining their “swimming” instinct requires. I suggest 50’s of free kick or backstroke swimming.

When you’ve given your swimmers a mental break, maybe doing a 50 kick or playing a game you can move on to the next portion of the progression, assuming you’ve done some breaststroke kick work in the past.

We do it this way so that the swimmer can understand that there are two distinct separate parts to the breaststroke stroke cycle. Generally, even when swimming, you don’t want the arms to be moving while the kick is, and we often suggest that swimmers “wait until the kick finishes (touches heels) before starting the arm stroke.”

I know some of you read this and are like, “I don’t buy into the whole 11, Y, Eat and Reach” concept. Are you teaching the circular split the pizza, spread the sauce, then come around type of breaststroke arms? You’re doing it wrong.

Where does Position 11 come from?

Steve Hoffler. He is the master swim teacher featured on GoSwim. Check him out. We’ve adapted and changed things to work more into our flow and outside of the individual swim lesson setting (large groups), but the basic concept and language (position 11) comes from him.

You will see swimmers do 11, Y, Eat and breath, Face down and reach, then breaststroke kick in position 11 in swim meets. You’ll see them do it at practice.

Really. It is fine.

11, Y, Eat and Reach is a start. It is the beginning of the most complicated specific and difficult strokes that you can do in the water. When participants have the basic motion down, when they understand that the kick drives the glide, and that the breath happens when the arms are scooping from “Y” under the face and then shooting forward back into position 11.

It is much better and easier to correct a stroke that is too long, too much gliding, too reaching into 11 than it is a stroke where the arms are never getting to that full extension or lengthening.

To get from 11, Y, Eat, and Reach to “real” breaststroke, you can simply start requiring swimmers to “shoot” back to 11 faster and reducing the time that they stay in 11. The fast the “shoot” from “eat” back into 11 the more natural the stroke will become and better the technique will get. You can introduce sculling drills, breaststroke arms with freestyle kick drills, and other things that will correct the stroke to be more natural and ‘swimming’ than the jerky, formulatic “11, Y, Eat, and Reach” swims you’ll see initially.

What do you think?

Do you use 11, Y, Eat and Reach? How have you done it in your swim lessons, or on your swim team? Let me know in the comments below, or connect on twitter @swimmingideas or on facebook.

Get the Visual swim skill sheet that outlines all the steps to breaststroke including drills and progressions with the starter kit.