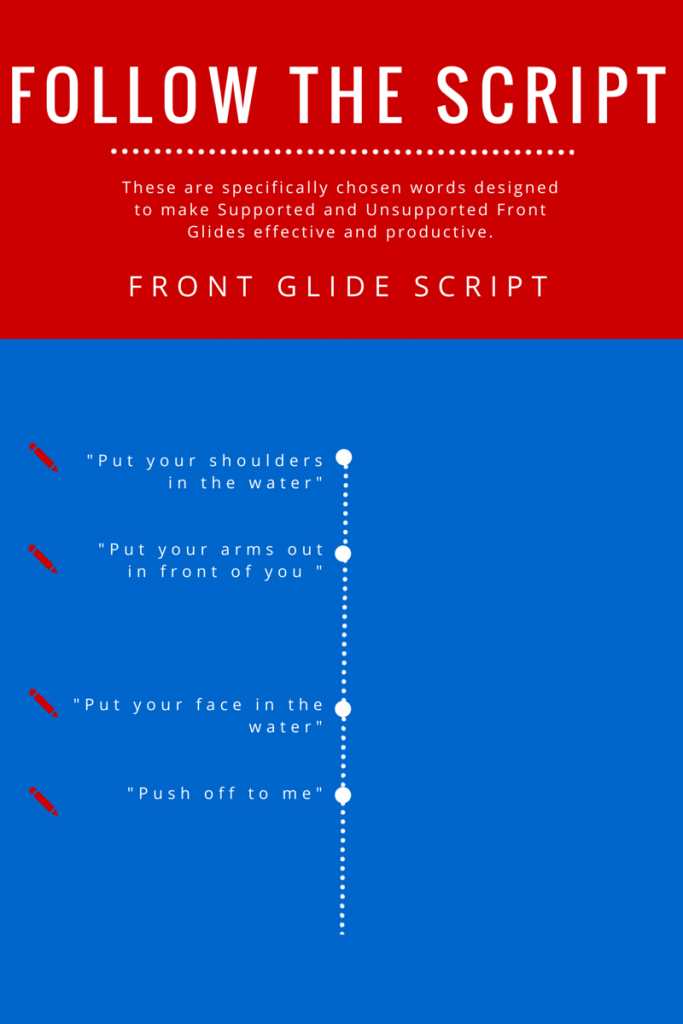 You can teach Front Glide in a variety of different ways. It is a skill you can use in Parent Tot, Level One, and Level Two. How you teach it changes in each level, and the focus changes based on the ability of the swimmers. We will break down each ability level for you and tell you what specific words you should use and why. Don’t be frightened by the specific script, the words are chosen to maximize the effectiveness of front glides and learning. A few common problem areas when learning are:

We go in depth on how to teach swimming lessons today, specifically Front glides!

“Put your shoulders in the water” 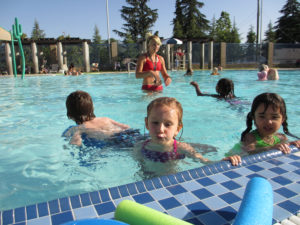 This is a specific instruction to have your swimmer get low in the water. We want to say this to give them a tangible and specific body part goal to submerge. Sometimes it is easier to say “bend your knees” to GET them to put their shoulders in the water, but it does not accomplish the goal with the minimum amount of direction. We want to give concise commands that are easy to follow. “Put your shoulders in the water” accomplishes our goal of a low body in the water, and gives a clear actionable item to succeed.

Why Getting low is good

One of the biggest problems when doing front glides in when swimmers jump up in order to move forward. In the water, they will jump into the air over the water, but will then immediately sink deeper underwater than they are often expecting or comfortable with. Instead, we want a more gentle push in a horizontal direction, ideally on the surface. The flatter on the surface the glide is, the farther they will go and the more relaxing it will be. Relaxing because they won’t be sinking deep underwater or have a sensation of falling.

We say “put your shoulders in the water” because it is the easiest way to start a glide and it minimizes the amount of jumping up and the subsequent falling and sinking.

“Put your arms out in front of you”

Why straight arms are ideal

We want the swimmer to put their arms out in front of them, and when they’re in a front glide above their head (because the face is looking at the bottom). First, because it is the first step to streamline, our ultimate goal with front glides. Secondly, we want this because from streamline we can easily start swimming freestyle. Having the arms out in front and specifically commanded to put them on the surface will also minimize the potential jumping up, and possible sinking after a jump.

“Put your face in the water”

Push putting your face in the water at every opportunity. Have a running dialogue where you push starting at face, moving to eyes, nose, then lips or chin.

When we are teaching our lessons putting the face in the water is often the first hurtle. It is a specific command because we want the face in the water BEFORE they push off to us. Once again it goes back to minimizing that initial “jump up” and then immediate fall down under the water, often deeper than is comfortable.

Use “push” specifically because if you say “jump” off to me, then the swimmer is more likely to jump UP instead of forward or horizontally. Again, we want to minimize any up over the water motions because it leads to an immediate down sink underwater that is often scarier than the horizontal glide because it induces a falling sensation.

Start close, and move incrementally away each attempt based on the comfort of the swimmer. Ideally the instructor will stand within arms reach of the swimmer. Give the script commands:

Put your shoulders in the water, Put your hands out in front of you (or on my shoulders), put your face in the water, or your chin, and push off WITH me.

Use some small variations to alter your specific commands. “Push off with me”, because you are a initially doing a supported front glide, and “Put your hands on my shoulders.” The general script should remain unchanged other than altering specifics for initial support or initial unsupported front glide attempts. 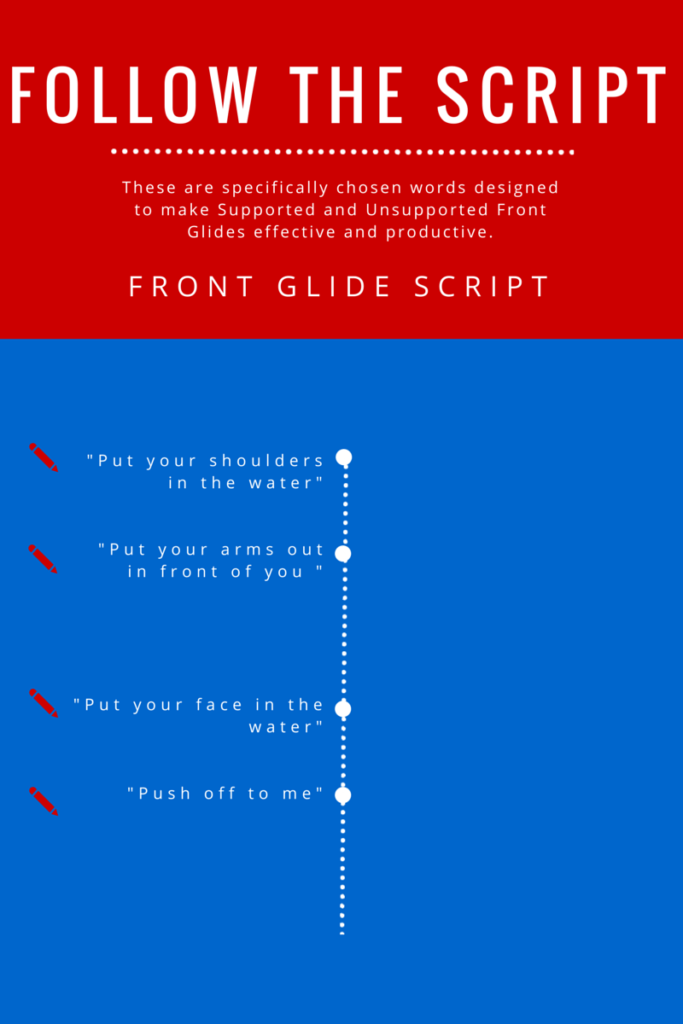 What is the difference? Unsupported and Supported Front Glides

Once the swimmer gets to the instructor, transition to the supported front glide, and walk backwards while supporting the body.

Instructor should encourage the swimmer to:

Once the swimmer gets to the instructor, transition to the supported front glide, and walk backwards while supporting the body.

Returning to the start location

When the swimmer gets to the instructor they should do a supported front glide together a short distance. While walking backwards get close to the starting location. You have 2 options:

To send them back alone

We want to recreate the original send off commands as much as possible. It is best to remain consistent with our commands and our process. It will establish routine and clear expectations.

Stand close to the wall or start location initially so the swimmer can easily jump forward. They should be “just” out of arms reach of their goal where a simple lean or push will get them there.

We can do this in the same way as the 1 and 2 step back transition from unsupported to supported glides. We want to start out close to our objective, and then slowly back up making sure we accommodate each swimmer’s personal comfort.

All of these glides will likely be supported as  you’re likely dealing with babies and the very young that don’t know how to swim or move on their own through the water. Parent Tot class is typically 6 months – 3 years old. The primary focus of the parent tot class is to acclimate the child to the water in a positive way. We use games and songs to help do this, but we also have specific ways to hold the child in the water, especially the Front Glide.

This is a decent video that shows where / how to hold the child with your palms up supporting the baby/child’s belly and chest.

We can still follow the same script, as we want to establish routine and clear expectations each time.

Remember, give commands. These are specific and clearly defined actionable goals.

We do Front Glides with support to help the child get used to laying flat on the surface of the water and establish a safe fun experience so later on the child is comfortable doing it themselves. It is all about creating a positive fun experience where they feel safe and relaxed.

In level one we’re doing 2 things: 1) we’re working on going underwater 2) we’re teaching a supported front glide with a goal of transitioning to an unsupported front glide. The script is really effective for this group of swimmers. The beauty of this script is that it works specifically for Level One, and for Level Two! We can absolutely adapt it for supported and unsupported glides. We’ve covered the details above. In level one, we want to initially establish trust in our swimmers by standing very close to the swimmer and following the script.

The instructor should stand withing arm’s reach of the swimmer and follow the script.

In level one we should also attempt to get the swimmers to attempt to push off on their own a little bit and do a very short distance unsupported.  You should use the above listed guide like Supported front glide, 1 step away front glide, and 2 steps away front glides. The instructor should use their discretion and assess how they should push each swimmer. We want to start safe and close, and then gradually take small steps away from the swimmer. Initially we’ll be doing mainly supported only glides, and then slowing moving up to a single body length unsupported with a supported glide immediately once the swimmer gets to the instructor.

The swim instructor should constantly be giving commands based on the script, and each round and should reinforce some of the essentials:

Finally, our end goal is to have the swimmer go an unsupported front glide more than three body lengths keeping their body flat on the surface, face down, kicking the whole time. Once we’ve done that we can tell the swimmers to do a streamline (hand over hand) and eventually start swimming front crawl after an initial front glide.

Looking for more depth or the next step? Check out these links: