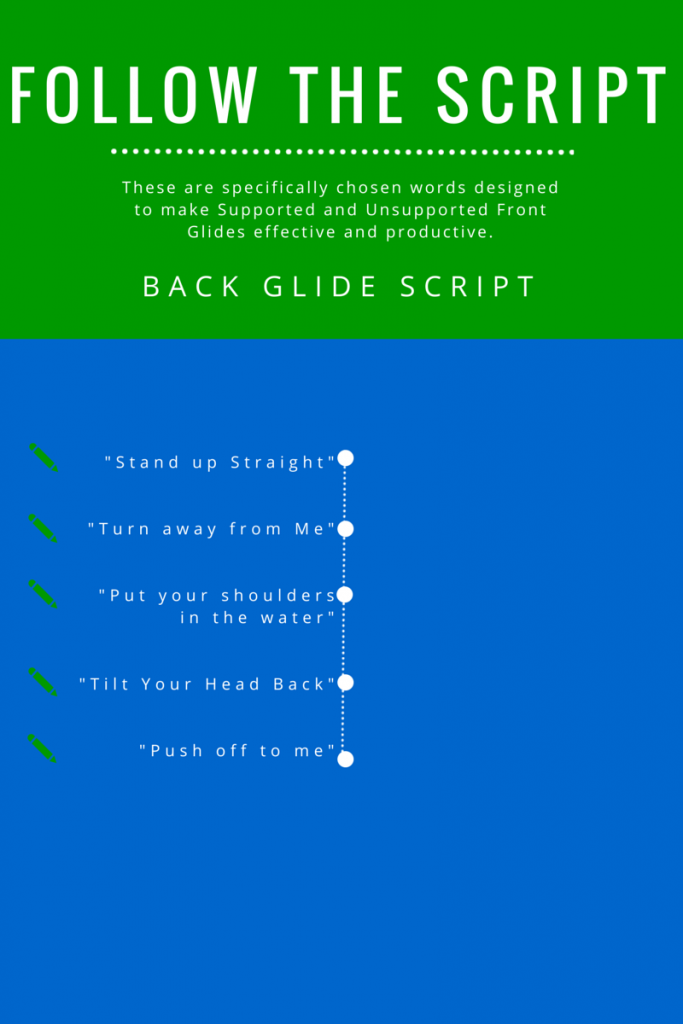 Back glides are one of the core essential skills in teaching swimming lessons. The first is going underwater, the second is doing a front glide with your face in the water, and the third, you guessed it, is doing a back glide. We will go over each of the specific phrases you should use to get the most out of each child’s attempt at back glides. We’ve chosen these words over lots of trial and error because they minimize the effects of poor directions and confusing instruction. Here is what we want to avoid:

We go in depth with Back Glides and the specific words you can use to mitigate all of those above pain points when learning.

We want to start in “Soldier Position.” I’m beginning to believe that this is perhaps the most important position for swimming; both teaching and coaching on a swim team. Soldier position is arms at the side, spine straight, chin pressed back into the neck. This is both the beginning position, and the ultimate goal position of the Back Glide. Back Glides should actually be soldier laying on your back, hands at side, body mostly straight, face out of the water. How we get to that position in a smooth transition is the difficult part, and then maintaining that position without support.

Start with the command, “Stand up straight” or “Soldier position,” and maintain that position as best you can throughout the rest of the directions.

“Turn away from me”

These instructions rely on the assumption that you are teaching the class in shallow enough water for the swimmer to stand in. Whether you’re standing on a teaching platform, or you are in a zero depth pool, these instructions are tailored for a swimmer to be in at most chest or shoulder deep water.

The swimmer should be in Soldier position, or standing up straight. We want to do a back float so we need to rotate them away from us, the instructor. Giving the command, “Turn away from me” implies that they should not twist or come out of soldier, but turn their shoulders or hips to rotate their body away from the instructor and look the opposite direction.

Again, our goal is to maintain Soldier position throughout the attempt.

“Turn away from me” has them stay in soldier, but put their back to the instructor.

“Put your Shoulders in the Water”

We’re in the meat of the script now, and you’re probably wondering why these specific words were chosen. Why not, “Bend your knees” or lets just jump right to push off to me? These words are specific because they keep the child from jumping up into the air when they push off, which causes them to sink immediately underwater. Most of the backstroke fear comes from that falling underwater and not knowing how to get back up. “Put your shoulders in the water” is a crucial step to allay that fear, and to ensure a smooth transition to either a supported or unsupported back glide.

We say “Put your shoulders in the water” because we want to give an actionable command. We want to get a result with the least amount of thinking and confusion, but while allowing the participant to achieve the goal on their own. Having each and every motion dictated at every step is boring (even though it is literally what we’re attempting to accomplish!). By giving a specific body part to lower in the water, we’re allowing them to figure out how to do it, and give them some freedom.

The participant, swimmer, should try to maintain Soldier position while they bend their knees or kneel down to put their shoulders in the water. They should not lean back, or lean forward. We said as our first command to “Stand up Straight” and we want to keep that straight body posture even though we’re lowering down into the water.

“Tilt your Head Back”

At this point in the script we’re almost at the action portion. We’re close to having the child begin their back glide itself. So far we have only prepared the participant in the setup of a Back Glide. The set-up or the preamble is designed to keep most of those initial jumps up that cause most of the problems in backstroke, and connected to this the fears swimmers usually have.

So far the swimmer has their shoulders in the water, ideally keeping their body straight with their feet on the ground, and are about ready to start.

The next instruction is designed to have a gradual and GENTLE push along the surface of the water, instead of a leaping flop that causes fear and sinking.

“Tilt your head back” initiates the back glide. It is the first step into going from a vertical body position and posture into a horizontal along the surface of the water body posture.

You can modify this by saying:

“Tilt your head back into my hand”

Place your hand palm up right behind their neck so that the crown/ back of their head lays flat on your palm. You can support the swimmer’s head by holding it in your hand. This is a great way to begin a little more advanced Back Glide.

If the swimmer can do the glide themselves, this command gives them a clear goal of tilting instead of slamming their head or leaping up into the air.

Finally we’re primed to push off the ground or the platform into the instructor’s arms. Make sure that you’re standing behind the swimmer in exactly the same spot that you were in when they first “Turned away from” you (Command #2).

We want the swimmer to push off to a horizontal end point. We do NOT want to suggest in any subtle way that the swimmer JUMP off the platform. We want them to be gliding safely, gently, slowly on the surface of the water.

The language of “Push off to me” suggests a slow and gentle push instead of a splashy sinking inducing leap or jump off. Remember this is important because this command negates that upward leap which results in a U shaped body and a sinking head before we’ve even begun. 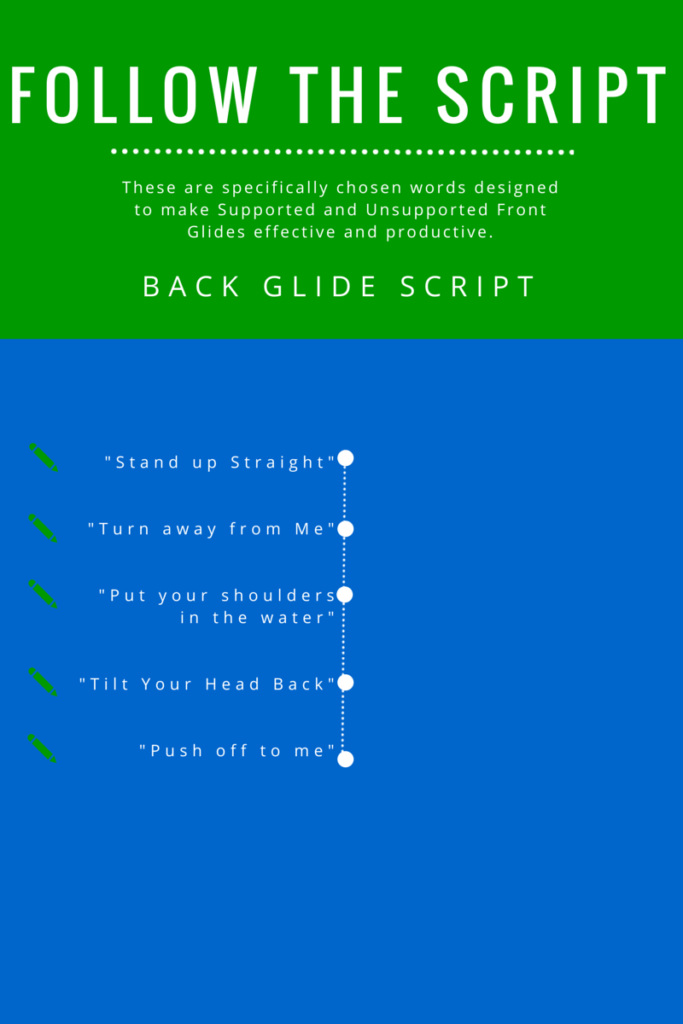