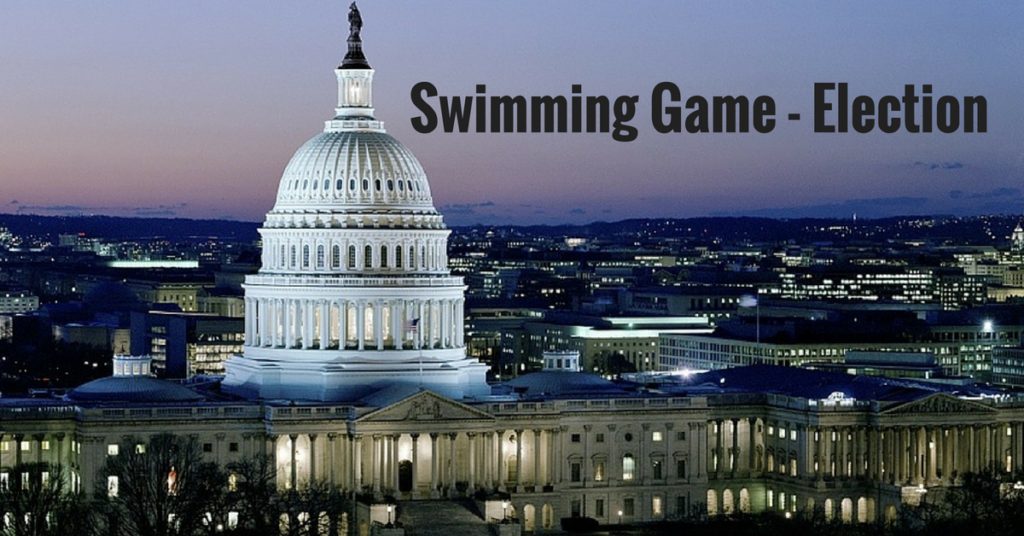 We played this game on the fly on November 8th, the night of the american election. With the results in, and Hillary Clinton winning the popular vote by 3 million, and Trump seeming the next president, it highlights some of the interesting things about american politics. We simplified a lot of things, but took the basic gist of the civic structure to make things move quickly.

I can see this game being really fun and interesting if we did it online with voting, and over a longer period of time. There are plenty of social opportunities, and options for choosing what skills and activities we work on at practice. I bet we could do a long term version of this game where the swimmers get a 10 minute chance every practice to dictate what we’re doing. As we move through the game, you’ll get a clear view how that might work.

Election, the swimming game, is intended for swim team participants. I do not think this would go over well with anyone that has a basic or limited understanding of swimming. Your participants should have a significant understanding of basic competitive swimming terms. I suggest playing the game after a few months of practices so your swimmers have a knowledge base to draw from.

This swimming game, Election, is designed to mimic the american government and elections. The president, senate, and House of Swimmers determines what activity the group will do next. The coach will choose a list of activities, and then the game is the process by which the swimmers choose those skills. What you will be working on is determined by the coach when they list out the possible options. Advanced swimmers can choose their own sets within some boundaries. The coach of advanced swimmers should set distance maximum and minimums and suggest kick, drill, and swim expectations.

Ok, bear with me here because ‘how’ you play Election for swimming is pretty complicated. Once you’ve done it a few times it becomes very easy, but can be difficult to initiate the first time with young or unruly people. First we’ll look at the different positions, and how you select them. Then we’ll go through the process, and finally how you choose the skills before letting the swimmers choose.

The primary point of this game is that elections have consequences. Secondary is the swimming. Divide your group into two separate parties, “political parties.” You can choose any two groups, but for this game, we suggest you use two pre-set parties: The Freestyle and Backstroke Party, and The Butterfly and Breaststroke Party. Generally the Free and Back party will only support free and back stroke sets, whereas the Fly and Breast party will vote and suggest Fly and Breast sets.

Each party then selects 1 nominee for President. Let the groups choose on their own who will be their party’s nominee. I suggest giving them a 2 minute time limit. Avoid having the coach choose for them unless necessary (coaches can become dictators).

Once nominees are selected, hold general elections where the majority wins. Everyone votes for candidate A, or candidate B.

President Elect should either enter water and do a short swim, or sit on the side for the remaining.

The losing presidential nominee returns to their party without title. Look at the size of the two parties. Generally one party will be larger than the other. The larger party gets 1 – 2 more House of Swimmer delegates. For example, Party A has 5 swimmers, and Party B has 8 swimmers, then allow Party A to choose 1 delegate, and Party B to choose 2 delegates. Scale this based on your judgement, but it is primarily based off of size. The larger party gets more delegates.

Swimmers in their parties get to choose on their own, doing their own “elections” or selection process to choose delegates. Once the delegates are chosen, then have them swim a short set, or sit aside.

Once everyone is elected by their parties, and by general election (president), the President then gets to choose 1 judge from the minority party (smaller size party), and two judges from the majority party (more people).

Roles of each position:

The coach must have a list or a published guideline for sets, activities, and things to do before we begin. The better prepared the coach is for this game, the quicker it will go with less downtime. 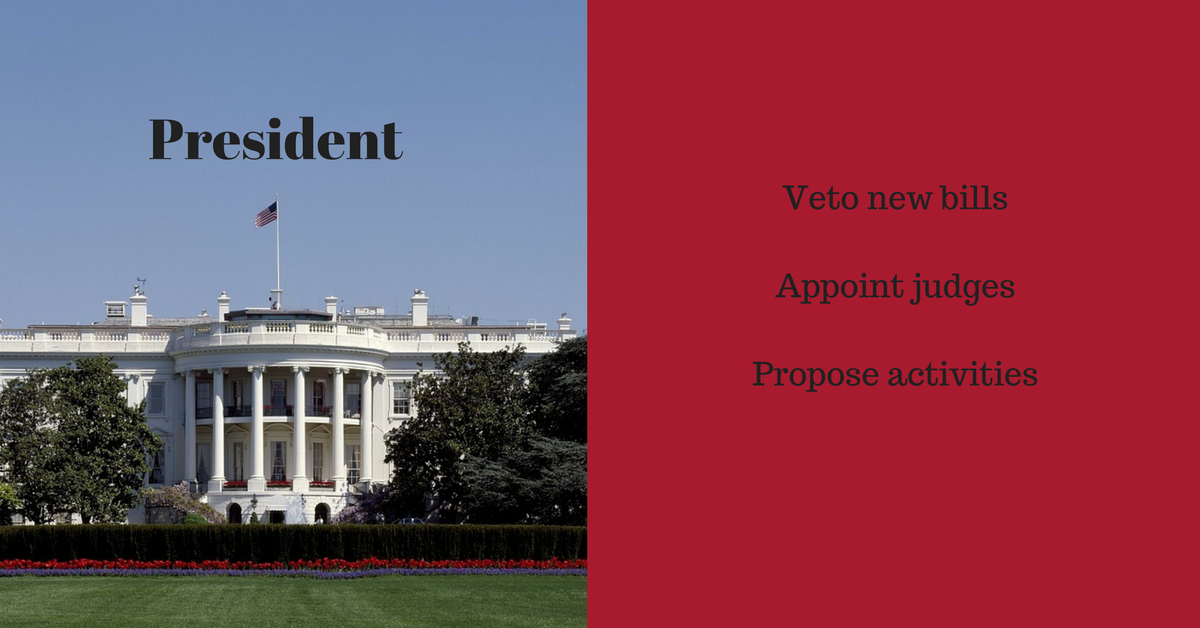 When the House and the Senate pass a bill it goes to the President who can choose to sign or veto the bill. If they pass something that the president proposed it must be signed, but if they pass something the president didn’t propose the president can choose to veto it. If vetoed the congress (both houses together) can override the veto with a 2/3 majority.  If the bill fails, and the congress does not override bill, then Coach Dictator swoops in and chooses next activity. Alternately, if you have voted and done the process in advance, then the activity dies, and move on to the next one.

President chooses 1 judge from minority party, and 2 from majority party that are not senators, or house of swimmer members. 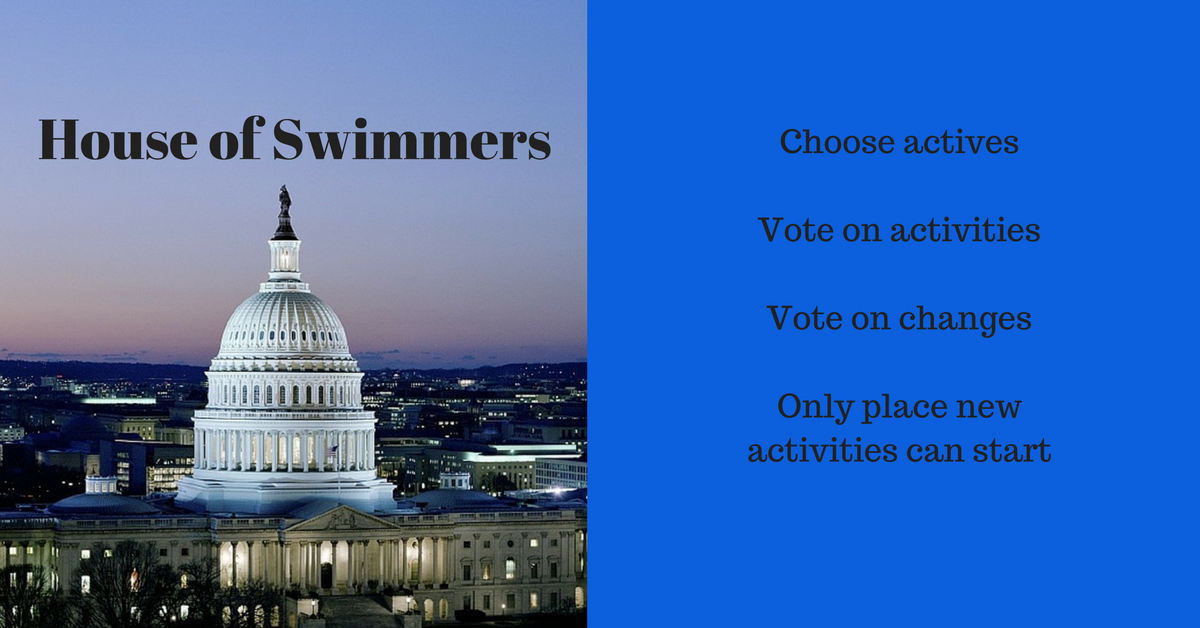 The House of Swimmers get to choose what to do. They get the choice. This is a pure majority rule, and the majority party has the most power here. Each House of Swimmer Delegate gets to choose their own 3 things they want to do from their party’s list

Coach should choose about 10 things or provide guidelines, for each party to do. The Free/Back party gets Free and Back kick/drill/or swim sets. They choose activities based on their party. Then, the other party does theirs.

The coach then deletes, or erases any activity that does not get any votes.

Then the House votes on each activity as a whole. If the majority votes ‘yes’ for an activity, then it passes the house, and it goes to the senate.

After changes come back from the senate, the House votes again, and if it passes, it goes to the president. If the president signs the law, it passes, and everyone does that activity.

If the president vetoes, then the House along with the Senate gets a chance to override the veto with a 2/3 majority.

Encourage talking to work out deals between House members and Senators. House of Swimmers can break party lines to vote for sets, activities, things that they want to do. 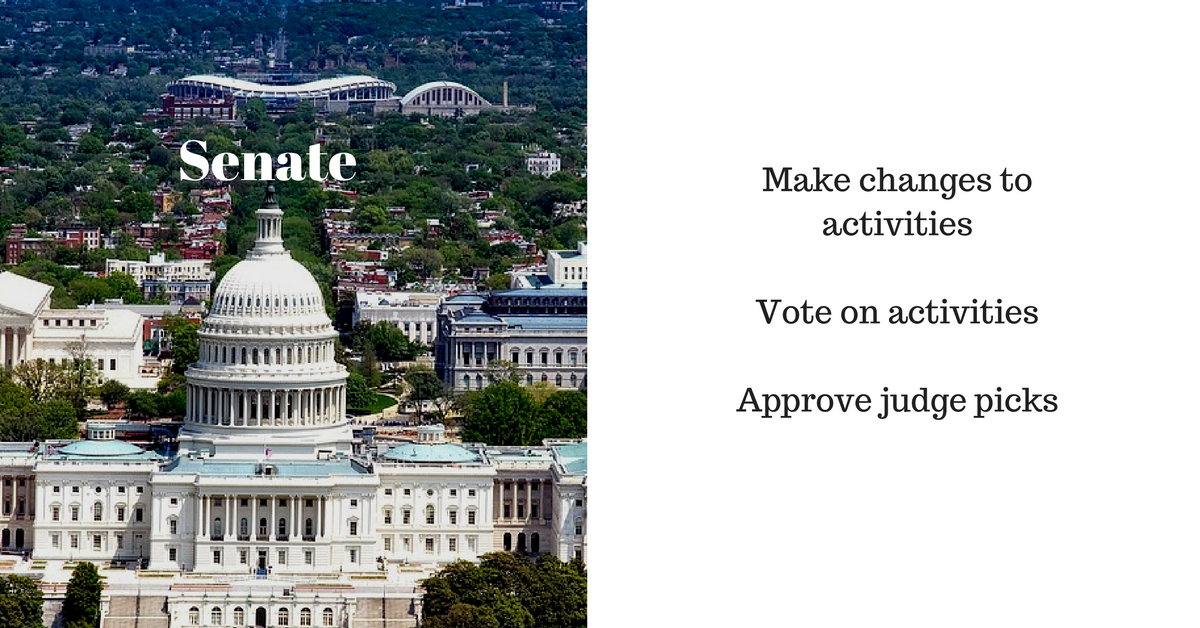 Senators are few, there should be a minimum of 3 and up to 5. They get to make edits to the activities. They run by majority, and whoever votes the most wins. Any Senator can suggest a change, and if the change is voted on with a majority, then it gets sent back to the House. The house then votes and if it passes, it goes to the President.

Each senator can only change 1 item from the activity, and that single item is voted on. If they do not have any changes, then they simply vote to approve the activity.

When the president vetoes a law (activity) then the senate gets to vote on overriding the veto if the Senate and the House vote yes with a 2/3 majority.

The senate gets to approve or deny the President’s judge picks. Generally in practice the majority party (who will have more senators) simply approve whatever their party’s president selects. If the senate refuses to approve anyone, the Coach Dictator steps in and assigns Judges. 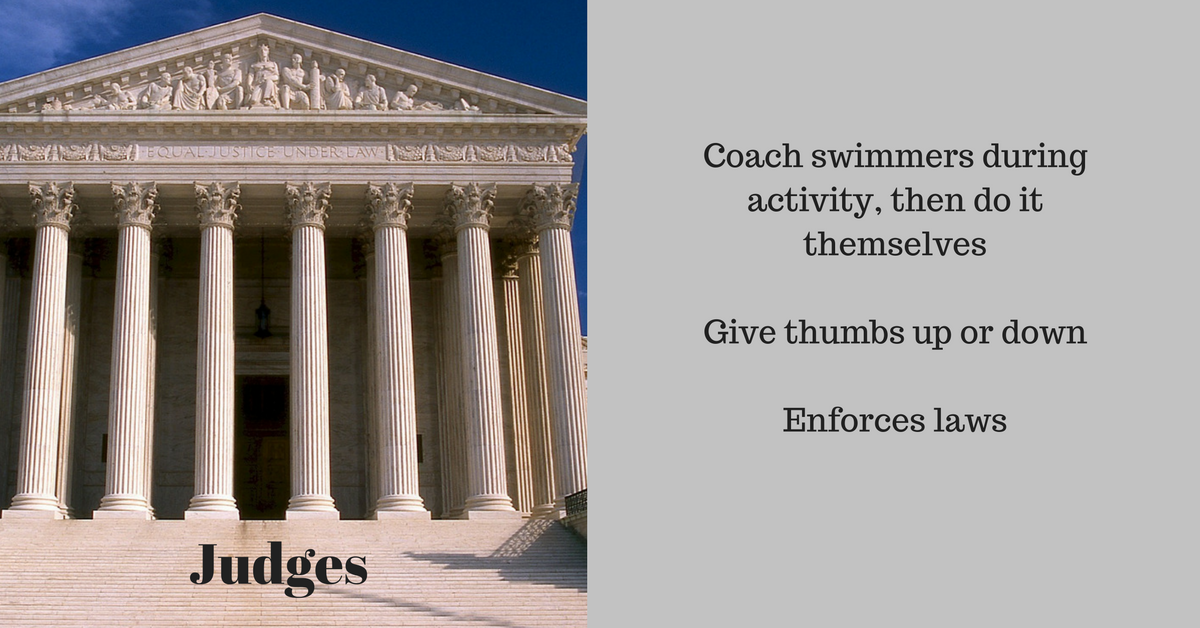 Judges give a thumbs up or a thumbs down to the swimmers.

If you want to get pretty crazy, then let the judges enforce the laws how they interpret them. They can choose what they want the swimmers to do based on their interpretation of the activity. When this gets out of control, the Coach Dictator steps in to restore order.

The pictures above show the first version of our Election day. We first do the election, then move through the activity creation process. At each step along the way, we wrote on the second board (on the right) and showed what was being voted on, and what the changes from the Senate were. We looked at what the president said, then what the final bill was. Swimmers then got in the water and did the activity.

I think this game has a lot of long term potential. Briefly I considered creating an online program to handle voting, elections, and activity creation. I thought users could log in vote for their candidates, and then those winning candidates would vote and go through the voting process for bills, with the President choosing to veto or not bills, all automatically.

Will you play this game? Have you played it? I would love to hear from you!

If you want to play more games like this, check out the book I wrote to create fun and effective swim games: